Here’s a really geeky t-shirt I designed a few months ago. 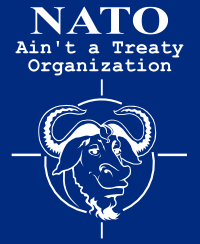 This is based on Aurélio A. Heckert’s Bold GNU Head, and is available under the Free Art License.

I expect that nobody would wear one of these, but if anybody actually is interested, they should get the relevant files and take them to their local t-shirt shop, and then send me photos.