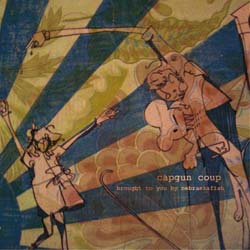 Capgun Coup is the best new band, according to Jamie Presnall from Tilly and the Wall. They’re Conor Oberst’s current favorite, too. Well, Jamie and Conor are friends, and Tilly and the Wall and Capgun Coup are both signed to Conor’s label, so I decided not to take their word for it.

Indeed, the cross-promotional marketing mumbo-jumbo was full of lies. Where the bio says they “are not the most well-versed students of rock music,” I find traditional rock elements, especially on My Tears Cure Cancer, one of the 3 pre-release songs from their upcoming album, Brought to you by Nebraskafish. And it rocks so well.

So, while I’d normally be repulsed such an impertinent media push, I’ve already bought into Team Love Records, which puts out some of my favorite music, and these guys are good enough that I’ll listen and pass them on to you.

I look forward to the record.