I made an application that makes a photo mosaic from Facebook pictures. It uses your friends’ profile pictures as tiles, and the picture formed is your profile picture. Here’s an example: 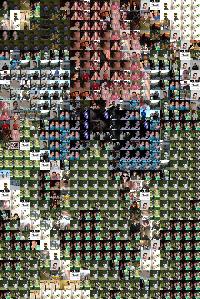 Unfortunately, the app uses too many resources to feasibly release it to the public on my shared server. It works today, just behind a password wall. If you want to use it and I know you, just email me.

So what good is this private use only app? Well, some open source software is coming out of it:

Making mosaics turned out to be quite simple. After building an index of tile images and their average colors, the big image is scanned section by section, and the closest-matching tile is pasted over that section. The only interesting question is what closest-matching means, given an average color for the section we are looking at and for each possible tile.

To compare two colors ((R1, G1, B1), (R2, G2, B2)) for closeness, I use the formula (R1 − R2)2 + (G1 − G2)2 + (B1 − B2)2.* Each channel difference is squared because it makes the number positive, and punishes bigger differences in a single channel, so a color which decently matches in all channels will be considered better than a color which matches very well in one channel but poorly in another. Lower numbers mean a better match, with 0 as the best, and 3·0xFF2 as the worst.

This formula was the first thing I tried, and it gave good results, so I didn’t mess with it.

* This mathematical notation is readable without having to think about it much, but the Python is more elegant. sum(difference ** 2 for difference in (channel[0] - channel[1] for channel in zip(rgb1, rgb2))) expresses the same formula if RGB is used, but it also works on any number of channels, so it can be used as-is with any color mode.

Hey. Awesome idea. how can i get the mosaic?